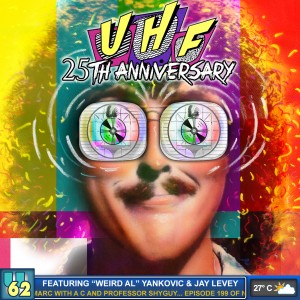 As a pop culture icon born of the music video age, “Weird Al” Yankovic is a multimedia artist. His music videos, TV appearances, and his cult classic film UHF have defined visual comedy for legions of weirdos. In this episode we send up the visual side of Weird Al and commemorate UHF‘s 25th Anniversary. To mark the occasion, Weird Al returns to Nerdy Show with his partner in crime, Jay Levey – director of UHF and many of Al’s classic music videos. They share insight into the creation of not only the film, but also The Compleat Al, a fan-favorite mockumentary on DVD for the first time; thoughts on the future of Al in film, the porn they inspired, and more!

Join Cap, Jonna, Marc with a C, and special guest host Professor Shyguy for engrossing discussions on our favorite gags from the film, Al’s forgotten album Me, Myself, and I, his foray into Saturday morning kids programming, his influential stints running Al TV, and Marc’s recipe for a perfect UHF sequel. You’ll be pleasantly suppliesed!