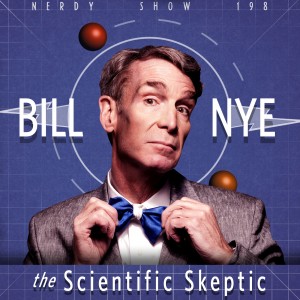 Whether you grew up watching him drop knowledge in the 90s or talk no-nonsense smack to pundits in the 21st century, chances are – you know Bill Nye. As “The Science Guy” he’s been an inspiration to millions, including many members of Nerdy Show. This mechanical engineer turned TV personality has made it his quest to spread the word of science and teach hard fact over sensational misconception.

Join Cap, Doug, boR, Jessica, and Jon as we discover Bill Nye’s origins and look back on his cultural milestones from his first appearance on TV, to his controversial debate at the Creationist Museum. We also look at “scientific skepticism”, the chief outlook of Nye, Sagan, and all high-powered science folk to put empirical reasoning above all else.

This science-infused episode is a fan-funded Microsode 2-pack thanks to Trench88 and Joshua Maher.