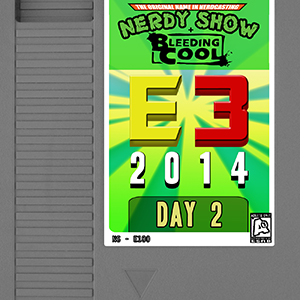 This E3 day offered not just thrills, but actual terror.  The last thing we want is to be seduced by another Alien game but dammit… Alien: Isolation is in a league of its own and truly embodies the notion of “survival horror”.  But it’s not the only game we saw flirting with danger and desperation – the creator of Resident Evil has returned to set a new bar for the horror puzzler, and the new zombie MMO, H1Z1 is shaping up to be the pinnacle of the zombie survivalist online gaming.

We also found our selves face-to-face with the future tech of the 90s with a VR demo that’s everything that bygone decade promised by failed to deliver, fell in love with a new IP from a brand-new studio,and checked out some fantastic indie games along with other AAA contenders.

Hear about our hands-on experiences with Alien: Isolation, H1Z1, Planetside 2,  The Evil Within, Battlecry, Lords of the Fallen, Paparazzi, Celestia, and nDream’s VR game – The Assembly. And our take on live demos of Sunset Overdrive, Dragon Ball Z: Xenoverse, Tales of Xillia 2, Hotline Miami 2: Wrong Number, and Abyss Odyssey.