Episode 176 :: State of the Empire – The Ponda Baba Conundrum 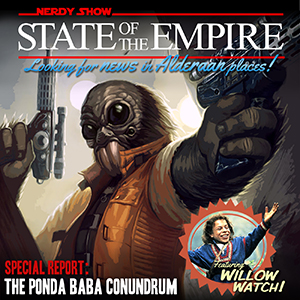 It’s a time of celebration throughout the galaxy. May the Fourth has brought jubilation to countless systems and the cast of Episode VII has finally been announced!  But – there are still many secrets surrounding the burgeoning new film.  Rumors of a mysterious cast member still to come, and the roles that the actors will be playing are yet to be revealed.  Join Cap, Doug, and Matt as they hunt for clues as to who’s who and what this might hint about the plot of the forthcoming film.

However, there’s much more afoot than the new film – the Expanded Universe has been decimated! The crew assesses what’s left of the known cannon and explore the ramifications of all known novelizations, comics, and games being taken out of play. We explore “The Ponda Baba Conundrum” – how with something as massive as Star Wars even the smallest phrasing can mean worlds of difference between what exists and what no longer does. We also predict what’s in store for the new TV series Star Wars: Rebels, how the books tie in, and how Anakin’s lost apprentice might return.

Discuss this episode on the Forums