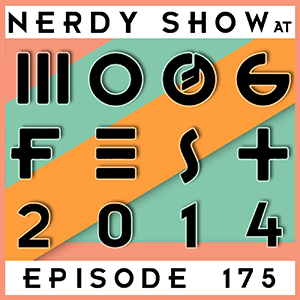 Calling all music nerds, sci-tech geeks, and mathletes! We’ve embarked on a perilous journey to one of the coolest nerd events there is – Moogfest!

What’s Moogfest?  It’s an annual event in Asheville, NC celebrating the legacy of synth pioneer Bob Moog. Formerly a music festival, this year it’s digivolved into a synthesis of technology, art, and music.  Join Cap, Jon, and Flame On!’s Bryan as they chronicle their daily adventures with real-life cyborgs, futurists, electric ladies, makers, musical innovators, and scientists of every sort. They reveal secrets from panels with the likes of synth legend Giorgio Moroder, android sensation Janelle Monáe, MIT robot designers, and wizards who study the sounds of the cosmos. The gang also discuss the cool performances from Moogfest’s eclectic selection of electronic music glitterati – everyone from circuit-bender Dan Deacon to the legendary prog rocker Keith Emerson.  Come along for one of the wildest, weirdest, most infotainment-packed geekstravaganzas of the year!