Dungeons & Doritos :: The Temple of Gloom 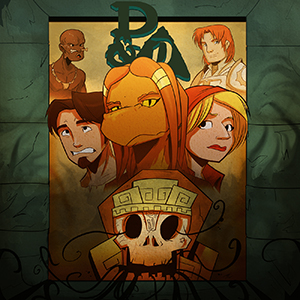 It’s Adventures in Barty-Sitting! Lefty & Jamela get stuck keeping watch over their fugitive comrade; so naturally they head out on the high-seas!  But it’s not all tanning butter and mojitos – no such luck. Instead, the crew find themselves stalked by skull-faced islanders and trapped in a mysterious temple filled with dark magick.  With no healer, an unequipped Barty, and a foe the likes of which they’ve never encountered – the forecast looks bleak for our adventurers.  Fortunately for Jamela, there’s at least one silver lining: a hunky paladin with a penchant for divine light.

Crunch along with Cap, Colin, Lefty, and Ruel as they try to roll their way out of another dicey predicament!